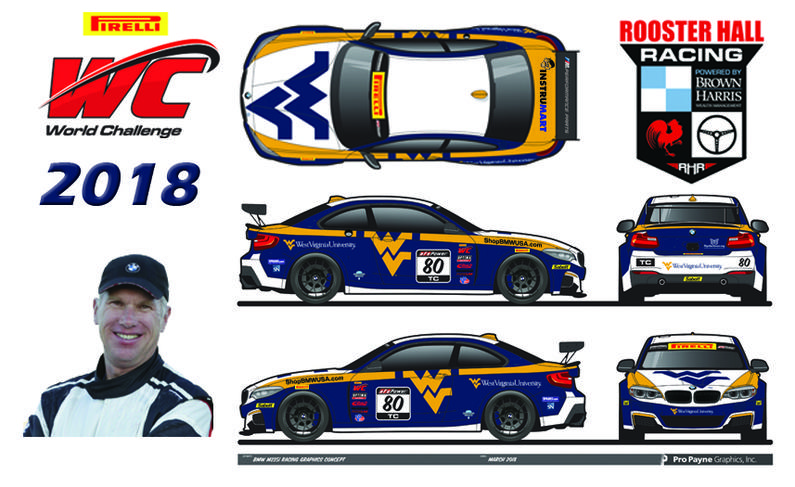 Schwartz, of Charlotte, N.C., raced a full season in the Pirelli World Challenge series in 2015, winning the TCB championship.  Always one to look for new and exciting challenges, Schwartz recently added two new Guinness World Records to his resume by drifting 232.5 miles in eight hours in the all new BWM M5 and by drifting 49.25 miles in a tandem drift.

Rooster Hall Racing, owned by Michelle and Todd Brown, finished sixth overall all in its debut last year and won TC Rookie of the Year with driver Anthony Magagnoli.  Todd Brown, partner of Brown Harris Wealth Management firm, is a BMW enthusiast and recently won his own National Championship in BMW CCA Club Racing in the C-Mod class.  Rooster Hall Racing also runs an exclusive BMW-only shop in addition to its racing teams.  Kevin Tuuri is the team manager and crew chief is Eric Meyer. For the 2018 season, Mark Ziegler and Justin Moser, two interns from the WVU Formula SAE team will join them.

Featured partners of Rooster Hall and Schwartz this season will be West Virginia University, ShopBMWUSA.com, Sabelt, Instrumart, and Diamond Creek Water.  Additionally, the car will highlight BipolarAware.org, a cause close to the team.

“I am very excited for this season,” says Schwartz.  “The synergies with the crew are there, my sponsors are excited to have a spot in the TC class, and I look forward to being back for a full season run.  Portland and Watkins Glen are two new tracks to this year’s schedule, and I believe the variety of tracks are good.”

“We have worked hard to put the best personnel in place for a successful season; now let’s go win some races,” said Brown in a recent interview, and this is exactly what they plan to do.