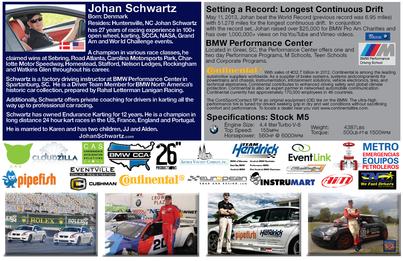 An 8-hour drift without stopping to refuel? 🏎😳 @BMWUSA drivers @JohanCSchwartz + Matt Mullins teamed up in hopes of making history. Tune in this Wednesday to see what went down. 🏁#M5Drift #GoProHERO6 pic.twitter.com/Qk9XvhL6e7

This isn't Johan's first World record, but it is the first one officially on the books.  Ever since Johan was part of a team in 2001 who set a record for the longest distance travelled in a go kart in 24 hours (this was a lay down kart and team set record on Charlotte Motor Speedways big track), he has been looking for the right opportunity to set an official record for the books.

drift.  The event was well timed and took place in conjunction

with the BMW Pro-Am Golf Tournament, which was the

perfect platform for Johan to set his goals on not only

breaking a record, but raising money the many benefits of

BMW Charity Pro-Am.  Johan sold over $25,000 of sponsorship on the drift car - and many of the sponsors were on hand to witness the record break.

Johan took the time to practice and make sure his execution of the drift attempt would be as flawless as possible.  BMW was a great support and both North American and German engineers were involved in pre event details and checks.  Johan took the time to put together a pre-event video with the help of Mike Lee - 26" Productions which currently has over 200,000 YouTube views.  BMW Performance Center put together an open house day for spectators to not only witness the event, but to have the opportunity to get on track in a BMW themselves.

It was a flawless event for Johan and break the existing record of 6.94 miles and setting a new record at 51.278 miles.  It took over an hour and 40 minutes to set the record.  To celebrate Johan gave a great burn out drift in front of the crowd and for many lucky sponsors and spectators, they also got hot lap rides on the big track with Johan.  On hand were many friends, family members, BMW clientele, and people who had come from as far as Vermont, Pennsylvania and Florida for the event.

"Johan did not disappoint.  We knew he would break the record, but didn't anticipate by just how much he would do this.  It was an exciting event and the first time we have witnessed a Guinness World Record." William Bohlayer exclaimed.  "To top the event off with Johan's hot lap ride gave me just an idea of how accomplished a driver one must be."

BMW and Johan both had videographers and photographers onsite documenting the event.  Combine, the videos currently have over 1,500,000 views on YouTube and Vimeo (see links to the left).

December 11, 2017, Johan again drifted for not one but two Guinness World Records in the all new BMW M5.  Johan drifted the longest distance drifted in 8 hours (232.5 miles) while also completing the longest tandem/twin drift (49.25 miles) with Matt Mullens.  Adding to the excitement, during the 8 hour drift, fueling was done mid drift so as to not give up time clocking miles.  Over 30 million viewers across several social media platforms have watched the videos from this event. 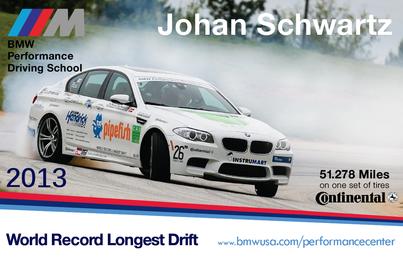