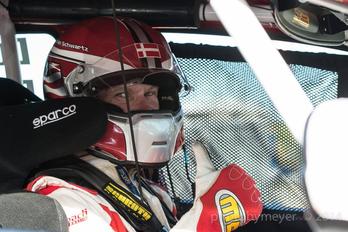 ​​   How to Correct Common Mistakes

Whether you are a professional race car driver or an HPDE car enthusiast, everyone can use tips to improve their driving. As a professional driver and coach, I have seen some common core mistakes that can be addressed by first realizing you are making them, and second, practicing to correct them.

Low Eyes: You may have heard it before and may be tired of hearing it, but addressing this is the number one cure to most bad driving! If there is only one tip you take in, it is “look where you want to go.” At slower speeds this is not so much of an issue, but as speeds increase, it becomes more and more important. The eyes tend to drop, as it becomes uncomfortable to continually look far ahead. The more you practice “eyes-up” the more comfortable and second-nature it will become. Practice this all the time (even during your street driving). Looking into the corner will help you with proper turn-in, brake release, and unwinding of the steering wheel.

Early Apexing: (a very common mistake). Early turn-in can lead to early off-the-track. There's a common error that the brain makes when speed increases: it tempts us to apex early because the big starting radius feels good in the beginning – little drama, but the drama may come shortly thereafter – such as going off the track, or worse, hitting something. Again, looking into the corner will really help with the proper and later turn in. Work your way up to the best apex by going in late to begin with, then turning earlier and earlier until you track out properly at exit.

Not using the brake hard or quickly enough for a full threshold brake corner: I often see drivers take their foot “casually” off the gas pedal and then slowly depress the brake pedal. A lot of time is lost when you could have stayed on the gas longer and then get to threshold by braking as quickly as possible. I’m not talking about multiple seconds here, but up to a second – but think about how far you can travel in one second! All this should be done while having your eyes on the apex, so that you can properly release the brakes. Don’t try to do this next time you are at the track. Work up to it, so you can get to quick threshold braking. Don't jump on the brake as it can confuse the ABS system and give you a hard pedal. Also by using a progressive but quick application, you will get proper weight transfer to maximize the braking ability of the tire. Keep in mind that correct brake release is more important for achieving overall speed, so you don’t want to sacrifice that.

Getting on the gas too soon and too hard:  Being progressive with the throttle is very important when exiting the corner. Although it has saved many spins and crashes, having traction control turned on can be a driver's downfall. People become too dependent on the system and think it is alright to floor it when getting on the gas and have the computer take over. Believe it or not, having the computer as your aid is still slower than if you drive the car right before the aid kicks in. Often when the stability control system kicks in it overcompensates, and dials back and takes away the power and speed needed to come off the corner strong. Work on being sensitive to the feedback the car is giving you and work the car right at its limit. Working without any electronic aids, this becomes even more important to avoid spins or overdriving the tire. However, always challenge the tire on exit for max exit speed.

If you constantly have the urge to get on the power too soon and potentially pick up understeer, try releasing the brake a little sooner (trail braking) in order to carry a little more rolling speed into the apex. That should take away the temptation to get back on the gas too soon. The cause for wanting to get back on the gas is often due to over-slowing the car at turn in.

Not using all of the track:  Most drivers don’t use the entire track available to them. Using the whole track gives you more radius and the ability to carry higher speeds through the corners. You have to balance this since using the entire track could potentially make you drop a wheel. As a good friend of mine who has won many pro races once said, “If you are not dropping the outside rear tire into the dirt, then you are not going fast enough.” But for most HPDE drivers that would not be smart. It’s high risk and could lead to damage to the car. However, when I am on a qualifying lap, I use every inch of track available including the curbs as long as it does not upset the car. It’s a good idea to keep this in mind, but always use caution. However, I often see drivers who have two feet or more of pavement left over to the outside on turn-in, and sometimes the same amount on track-out.

Turning the steering wheel too fast on initial turn-in:  A tire needs to build up slip angle and load to achieve grip, so initial turning should be slow and after that, hand speed should accelerate until max steering input. The quick turn in will "shock" the tire and not allow it to build traction - overall grip is lost. The same thing happens when unwinding. The mistake of turning the wheel too fast on turn in can be fixed by keeping your eyes up to avoid being surprised when the apex shows up. You may also have heard the expression “slow hands.” Let the car/tires know what you intend to do and build up the slip angle and load of the tire.​

Many times while working on your driving, you know you are doing something wrong, and there is a consequence, but sometimes you don’t know why. Hopefully you will be able to use some of these tools to help you drive faster and safer on the track. A coach is great, but it is even better when you can be your own coach and work on improving your driving by giving yourself correct feedback.

In the Driver's Seat with Johan
​

provides tips on how to find speed